This paper introduces the concepts of Elasto-Plastic Systems (EPS) and Self-Centering Systems (SCS) for the seismic design of steel-framed hospital buildings. Redesign of the MCEER West Coast Demonstration Hospital with SCS is conducted using this approach. An ensemble of 25 simulated MCEER Ground Motions having a probability of exceedence of 5% in 50 years in Northridge, California is used as earthquake excitations in the seismic analysis of the building. The SCS are achieved by Post-Tensioned Energy-Dissipated (PTED) beam-to-column connections. The redesign procedure is briefly outlined. With a set of optimal design parameters for the SCS, the structural system achieves very good seismic performance. Not only are the maximum displacements reduced, but the floor accelerations are also diminished, which is rarely achieved with other passive hysteretic control systems, such as friction or metallic dampers. Also, residual drifts are largely reduced or eliminated, which will decrease the cost to repair. The improved performance obtained suggests that the implementation of SCS can lead to improved seismic behavior at a reasonable cost.

Steel Moment Resisting Frames (SMRF) were widely used in North America and the world until the failures of brittle beam-to-column joints were observed in a large number of SMRF structures as a result of the 1994 Northridge earthquake. Before this seismic event, many practicing engineers believed for years, albeit incorrectly, that steel structures were immune to earthquake-induced damage as a consequence of the material’s inherent ductile properties (Bruneau et al. 1998). However, the January 17, 1994 Northridge Earthquake (Los Angeles, CA) changed the thinking of the earthquake engineering community. Approximately 100 SMRF structures experienced beam-tocolumn connection fractures in the Northridge earthquake (SAC, 1995). 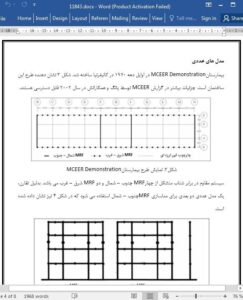