The production of textiles began very early in the Near East, even before the development of settled villages and the domestication of plants and animals in the Neolithic Period (New Stone Age, the 7th and 6th millennia B.C.). Flax was one of the first fibers to be woven; it appears in an elegantly knotted net with a woven border found in the Nahal Hemar Cave on the southwest banks of the Dead Sea."1 Flax also appears about the same time in Anatolia at Catal Hiiyiik, a partially excavated site once covering some 32 (?) acres. The Catal Hiiyiik textiles, which also included wool ormohair worked in S- and Z-spun two-ply yarns, came from intramural burials where they bound up the bones of the dead and in one case filled a skull.2 Unfortunately, the fires that destroyed the site on several occasions charred the fabrics so that no trace of color now remains. However, the dye plants woad, madder and weld are native to the region, and the excavator believed that they were used at Catal Huyiik.

Closer to Iran are the impressions of two types of fabric as well as reed matting and basketry found on small clay objects at Jarmo, aNeolithic village on the western slopes of the Zagros Mountains in eastern Iraq.3 The textile remains from the IraniarTpLaleau proper do not date quite as early, in part because scientific archaeology began later in Iran; and it is only since the late 1950s that widespread work has been carried out, primarily in the Zagros and in Khuzistan. Natural dyestuffs are abundant in Iran as are mordants,4 and one may assume that these materials were utilized in antiquity. Additional information about ancient Iranian textiles can be derived from representations in works of art as well as the impressions left by textiles wrapped around metal that later corroded. These mineralized formations or pseudomorphs were produced by petrification and faithfully replicate the shapes of the fibers, providing the researcher with documentation for organic material that normally would have been lost. The Iranian corpus may also be supplemented by evidence from Mesopotamia, the lowland to the west that was in continual contact, both peaceful and hostile, with Iran. Present evidence suggests that Mesopotamia was a vital factor in the Iranian textile tradition. The following preliminary survey is presented with the hope that it will arouse new interest in material long known and provoke further work by qualified specialists. Archaeological evidence for textil 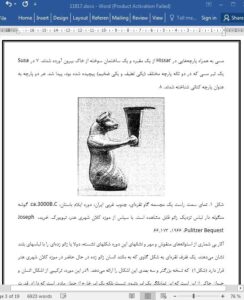