In European countries, the design of bridges is conducted following the specifications in the Eurocodes. For verification against fatigue of steel bridges, a simplified model is suggested based on a single vehicle load model together with λ factors to estimate a representative stress range. Since the release of the Eurocodes the accuracy of this format has been discussed and questioned. In the current paper, a probabilistic model for fatigue assessment is suggested estimating the load effect from bridge weigh-in-motion (BWIM) measurements. The probabilistic model has been used to estimate the reliability reached with the existing verification format for road bridges. The result shows a large scatter depending foremost on the bridge geometry and the traffic volume. A tentative calibration of the verification format has been performed and new functions for two of the λ factors have been derived. With these new functions a significant improvement in the consistency of the reliability level has been achieved. The study demonstrates the need for a more extensive calibration of the Eurocode model and indicates the parameters to focus on.

Designing a steel bridge against fatigue damage requires estimations of the load effect and the resistance at critical details. The load effect needs to be estimated using a structural model and depends on the traffic intensity and the type of vehicles travelling over the bridge. In reality, a bridge is typically loaded by a range of different vehicles with varying axle configurations and gross weights which is not feasible to consider during the design phase. In practice, the design is performed using predefined simplified load models described in regulations.

With the purpose to validate the Eurocode model for fatigue assessment of road bridges in steel, a probabilistic model has been suggested. It is based on vehicle loads determined by BWIM measurements. The model has been used to estimate the reliability achieved using the existing verification format by analyses of some simple bridge models. By an iterative process, the Eurocode verification format has been calibrated to render a more consistent reliability level. 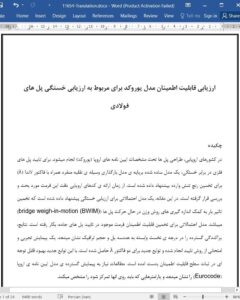 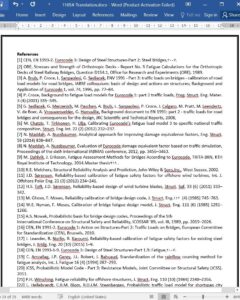