with the growing power demand, it is vital to expand power transfer capacity of transmission lines. But the new expansion in our present transmission system is confined due to financial problems, environmental concerns and health hazards due to electric and magnetic fields. May be its worthwhile option to use flexible AC transmission system (FACTS) for enhancement of power capacity of transmission system. This paper presents, fruitfulness FACTS devices SSSC and TCSC with POD (Power oscillation damper) as additional controller. The major function is to decrease the peaks overshooting and clearing time of inter area oscillations, hence betterment in transient stability. For the fulfillment of analysis, time domain simulation outcomes are correlated for results verification. In addition, the parallel operation of SSSC for the system has been analyzed. This paper proposes modeling and simulation on MATLAB/Simulink Software for the proposed test system. Result displays that, power oscillation are rapidly damped than traditionally PSS by employing POD with FACTSControllers.

In present-day world, electrical power demand is increasing significantly over the last few decades. After all this growing rate of power demand does not pursue through the enrichment in power generating plants and transmission capacity. Thus in place of, to accommodate the increasing electric load requirement, power generation plants are operating at their maximum capacity[1]. Similarly transmission lines are also running nearer to their thermal limits. So, the power systems are seemly less sheltered and always carrying the exposure of voltage instability which has led to many major network collapses world-wide[2].

This paper presents the electric power network with different loads linked at distinct buses as a test network with FACTSPOD controller by accomplishing a time domain simulation in MATLAB/Simulink software. The enforced POD gives stabilizing signals to the FACTS devices. For the investigation of series FACTS-POD, a 3-phase fault is activated at time 1.33 sec having fault duration is 0.166 sec. Results revealed that SSSC with POD has superior potential for damping the network oscillations as compared to TCSC controller. In addition SSSC-POD rises real and reactive power of the system, hence improving load capacity of the network. Thus it can be concluded that power oscillation damping and PTC of the power network with various loads at distinct buses increased by employing SSSC and TCSC with additional POD controller. 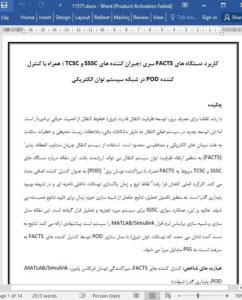 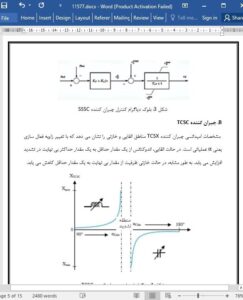 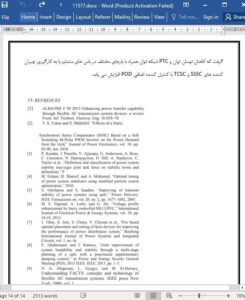