Economists are trained to infer preferences from observed choices; that is, economists typically watch what people do, rather than listening to what people say. Happiness research departs from this tradition. Instead, happiness researchers have been particularly interested in self-reports of well-being, which may be as simple as an answer to a question with the general form: “Are you very happy, pretty happy, or not too happy?” Hundreds of thousands of individuals have been asked this kind of question, in many countries and over many years, and as reviewed in Frey and Stutzer (2002), researchers have begun to use these data to tackle a variety of questions.

Most utility functions assume that higher levels of current personal income lead to higher utility. In 1974, Richard Easterlin introduced happiness data into economics and observed that their basic pattern was at odds with this assumption. Specifically, Easterlin (1974) observed that happiness responses are positively correlated with individual income at any point in time: the rich report greater happiness than the poor within the United States in a given year. Yet since World War II in the United States, happiness responses are flat in the face of considerable increases in average income. Figure 1 reports the average happiness response for repeated cross-sections of different Americans between 1975 and 1997 (with the three categorical answers assigned the numbers 1, 2 and 3). Figure 2 presents the cross-section results for the United States in 1994. A similar pattern has been observed in a large number of countries, including France, the United Kingdom, Germany and Japan, and for different periods of time (Easterlin, 1995; Blanchflower and Oswald, 2004). In Japan, income rose by a multiple of five between 1958 and 1987, and happiness remained stationary.1

Happiness data are being used to tackle important questions in economics. Part of this approach is quite natural, as many questions in economics are fundamentally about happiness. But the approach departs from a long tradition in economics that shies away from using what people say about their feelings. Instead, economists have built their trade by analyzing what people do and, from these observations and some theoretical assumptions about the structure of welfare, deducing the implied changes in happiness. Economists who believe that welfare can be measured to some extent by happiness surveys have an easier time. They simply compare measures of welfare, and what causes changes in welfare, under different scenarios. Of course, results based on happiness surveys should be treated critically and cautiously. But the two main alternatives for determining social welfare—either trying to back social welfare out of observed behavior or simply giving up and leaving it to the politicians— surely need to be treated critically and cautiously, too. The patterns observed in the empirical measures of welfare and happiness deserve to play at least some role in the evaluation of what social goals to emphasize, what macroeconomic tradeoffs are acceptable and what public policies are pursued. 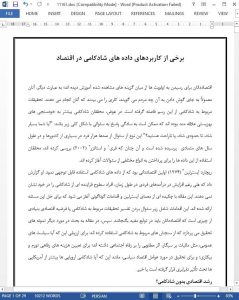