Seismic design codes mostly claim that their requirements lead to Life Safety (LS) Performance Level (PL) for buildings. This is while many buildings, designed based on the current codes have shown unacceptable performance, and even have collapsed in some recent earthquakes, particularly near-source events. On this basis, it seems that the code provisions still need further improvement to create sufficient confidence in the engineering community. This study has been conducted to find out how IBC 2009 And ACI 318-2014 codes are effective in providing the LS PL in reinforced concrete multi-story regular buildings with special moment frame lateral load bearing system. For this purpose, a set of multi-story buildings up to 16 stories were considered in the highest seismic hazard zone of Tehran, and were designed based on the codes. Then, a set of near-source three-component accelerograms were employed and scaled according to the code, and a series of nonlinear time history analyses were conducted for all buildings. Roof displacement and acceleration, and base shear forces were calculated, and also the formation trend of plastic hinges and their distribution in the structures were investigated for evaluating the seismic performances. Results show that for some earthquakes the buildings performance exceed LS PL, and even in some cases they reach collapse level.

Most of the current seismic design codes for building systems claim, either explicitly or implicitly, that design of buildings’ structures based on their requirements leads to Life Safety (LS) as their minimum Performance Level (PL). This is while some buildings, designed based on the current codes’ provisions, and constructed based on high standards, under good supervision, have shown unacceptable PLs, even collapse in some recent earthquakes, particularly near-source events. Also in many cases the extent of damage in the earthquake stricken buildings has been so high, that the demolishing and reconstruction of the building have become inevitable. On this basis, it seems that the code provisions still need improvement to create sufficient confidence in the engineering community.

Results show that for some of the employed earthquakes the buildings’ performance exceeds the expected performance level, and even in some cases the buildings reach collapse level. This exceedance can be mainly due to the effect of the high intensity of vertical ground excitations. Furthermore, the distribution of plastic hinges in the buildings’ structures is not uniform, and they usually concentrate in some specific levels of the buildings, depending on their height and the input earthquake characteristics. On this basis, it can be claimed that the code provisions still need improvement, particularly with regard to the inclusion of the effect of extensive vertical ground motion of nearsource earthquakes, to lead to design of buildings which confidently achieve the live safety performance level. 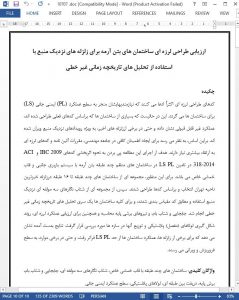 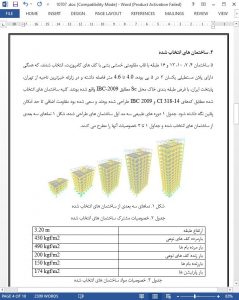 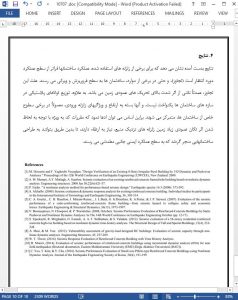