This paper advances our understanding of policy formulation, exploring how the particular institutional dynamics between the transnational and national levels of enterprise policy-making affect policy choices made by governments and consequently their outcomes. The paper argues that policy development occurs within a framework of dominating assumptions on enterprise, influential academic/policy communities and lesson-drawing from other countries’ experiences, which have led to a privileging of the transnational when making policy choices. Empirically, the paper draws on a post-socialist country case – Albania, and uses interviews with policy actors and documentary data from national governments and international organizations. The paper explores the dynamics involved, and the actors that shape, policy formulation and makes two contributions to the literature. First, it provides a conceptual framework on how to analyse policy formulation, extending recent work on the link between policy formulation and the intended outcomes of policies. Second, it offers a more nuanced conceptualization of enterprise policy formulation, arguing that policy formulation reflects the changing configurations of ideas, policy tools and resources, and actors involved in the process.

The role of context in entrepreneurship development has been widely recognized (Welter 2011; Zahra and Wright 2011), as context shapes the nature of entrepreneurial opportunities and entrepreneurship’s contribution in our societies. The institutional development of a country (Boettke and Coyne 2003) and the social structures in which entrepreneurship is embedded (Davidsson 2003; Baker, Gedajlovic, and Lubatkin 2005) provide clues to the different entrepreneurial trajectories unfolding in diverse contexts (Garud, Gehman, and Giuliani 2014). Governments have a major influence on the conditions under which enterprise develops, and scholars, both in the developed and developing countries, have argued for the need to ensure there is a good fit between policies and the actual entrepreneurial environment (Minniti 2008; Heinonen, Hytti, and Cooney 2010; Lundstrom et al. 2014). This has often translated into calls for, or attempts from scholars, to take into account contextual differences in explaining policy outcomes (Parker 2008; Xheneti and Kitching 2011; Mason and Brown 2013; Acs, Autio, and Szerb 2014; Smallbone, Welter, and Ateljevic 2014).

Our aim in this paper has been to explore enterprise policy formulation by taking a broader view of the context where policy-making is situated. Starting from the assumption that a privileging of the transnational context when formulating enterprise policy might affect policy choices and their effectiveness, we used a neo-institutional perspective combined with an interpretive method of policy analysis to understand how the interaction of policy actors and factors at the national and international level informs policy formulation. 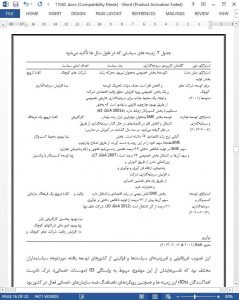 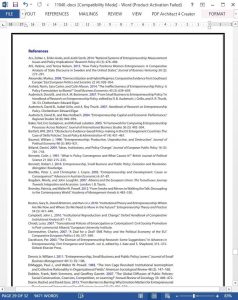