Driverless cars are seen as one of the key disruptors in the next technology revolution. However, the main barrier to adoption is the lack of public trust. The purpose of this study is to investigate the key factors influencing the adoption of driverless cars. Drawing on quantitative evidence, the study found that the ability of the driverless car to meet performance expectations and its reliability were important adoption determinants. Significant concerns included privacy (autonomy, location tracking and surveillance) and security (from hackers). The paper provides implications for firms developing the next generation of car features and early implementation sites.

The World Health Organization has indicated that 1.2 million people die in accidents each year (WHO, 2015). Driverless cars have been deemed an important technology in reducing a portion of those deaths due to human error (Kyriakidis et al., 2015). A driverless car, otherwise termed a self-driving car or an autonomous car, broadly refers to a robotic vehicle that works without a human operator (Benenson et al., 2008; Paden et al., 2016). More specifically, it can be defined as ‘those in which at least some aspects of a safety-critical control function (e.g. steering, throttle or braking) occur without direct driver input’ (NHTSA, 2013, p. 7). There are various levels of automation of driverless cars and various classification systems exist (the widely adopted SAE standard, the National Highway Traffic Safety Administration (NHTSA) standard and the German Federal Highway Research Institute (BASt) standard). These systems generally encompass five levels of automation from no automation to various levels of partial automation to fully automated (Kyriakidis et al., 2015).

While the research offers valuable insights, there are limitations and opportunities for future research. The study was based on a case study of one closed environment, a university campus. While this offers important implications for such campus environments as many universities are embarking on driverless initiatives, there are other closed environments that may be of interest. For instance, while the aged and disabled are seen as early adopters of driverless cars, few studies have actually surveyed these groups to ascertain their views on driverless cars. Future research is needed to give voice to these groups and obtain their views rather than make assumptions on what is best for them. Similarly, other closed environments such as airports can be associated with another set of situational factors such as time pressures and international safety and monitoring requirements that are increasingly associated with airports. Cyber-security and terrorism at airports through hacking of programmable systems needs more in-depth analysis in the context of airports in future studies. 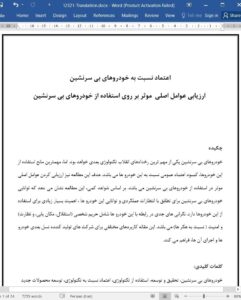