Previous research has produced valuable results on the transient dynamic response of tunnels buried in full-space. However, a half-space model is of more practical interest because tunnels normally have finite buried depths. In this paper, the dynamic response of a lined tunnel is studied where the surrounding soil is described using Biot's theory and the lining is described by the theory of elastodynamics. The half-space straight boundary is approximately represented by a convex arc of large radius. In accordance with Graff's addition theorem, the general solutions in a rectangular coordinate system are converted to ones in a polar coordinate system. The solutions for displacements and stresses of both the soil and the lining as well as the pore pressure of the soil in the Laplace transform domain are derived based on boundary conditions. Time domain solutions are then obtained by the use of inverse Laplace transform. Numerical results are presented showing the distributions of peak values of ground displacements, stresses and pore pressures of the soil.

The main results of this study are summarized as follows:

(1) The peak values of vertical ground displacements tend to be smaller with increasing the buried depth of the tunnel. The maximum peak value appears along the center line of the tunnel. The peak values and amplitude induced by a suddenly applied constant load and a gradually applied step load are similar to each other and far greater than that induced by a triangular pulse load. The amplitude of ground displacement reaches the maximum value in the center of the tunnel and gradually reduces outwardly. 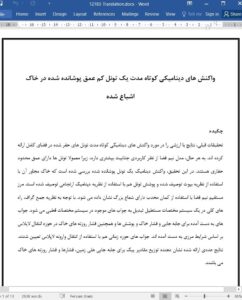 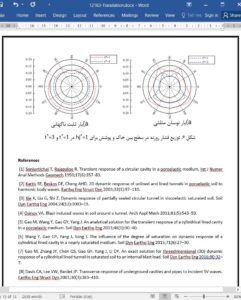