Although scholars describe consumer behaviour as a process of acquisition, consumption, and disposition, limited research is done on disposition decisions, especially in the context of emerging economies. This paper looks into the early work of Jacoby et al. (1977) and the recent seminal work of Cruz-Cardenaz and Arevalo-Chavez (2017) to determine the relationships between external influences and various disposition decisions on smartphones. In particular, it investigates the effect of brand, price, usefulness, compatibility, product attachment and social influence on three types of disposition decisions. A quantitative approach using a self-administered survey was appropriated. The questionnaire was distributed at the universities in Malaysia, and was subsequently collected from those sites with an acceptable response rate. Partial least squares structural equation modeling (PLS-SEM) was utilized to perform path modeling analysis. The results show that usefulness, product attachment, and compatibility have positive effects on students’ decisions to keep their smartphones. While low product attachment and social influence affect them to dispose their smartphones temporarily, the depreciation of value causes them to discard smartphones permanently. Remarkably, brand and price have no significant impact on disposition decisions, indicating that the function of the smartphone, rather than the device itself, matters more in disposition decisions. The study thus provides more insights into consumer behaviour and its implications on sustainable consumption.

Communication is ubiquitous in all walks of life. Evidently, smartphone has emerged as one of today's most widely used products. Smartphones provide communication services by carrying out several functions of computers and telephones (Thaichon et al., 2016). Consumers are changing from ordinary traditional mobile phones to smartphones not only in developed countries but also developing ones (Wong, 2011). According to the Ministry of Communication (2011) and Malaysian Communication and Multimedia Commission (2014), Malaysia, with 144% mobile penetration, outpaces Indonesia, Thailand, and even the United States. Observers expect this figure to further increase in the coming years, suggesting the high adoption and usage of smartphones in developing economies.

7. Limitations and directions of future studies

Notwithstanding an exploratory study with specific objectives, it is limited in several aspects. Firstly, the sample of students was assumed homogenous, thus disregarding the potential differences among students with different personal and psychological characteristics. Secondly, having university students as the target population only will likely compromise the generalizability of the findings to the wider populations and other important segments. Thirdly, the study adopted cross-sectional design and does not measure actual behaviour as well as behavoural change when disposing the smartphones. In light of the aforementioned, future investigations on disposition decisions should take observed and unobserved heterogeneity into consideration. Performing permutation and multi-group analysis using demographic factors, such as gender and social status, could potentially divulge more insights into the phenomenon. Moreover, comparing disposition decisions across different population segments and incorporating psychological or situational factors as moderators in the structural model could also provide more theoretical and practical explanation to the subject matter. It would also be interesting to conduct longitudinal study or experiment on disposition decisions so as to yield results which are more practically meaningful to business practitioners and other relevant stakeholders. 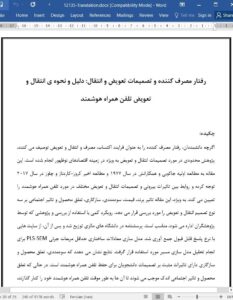 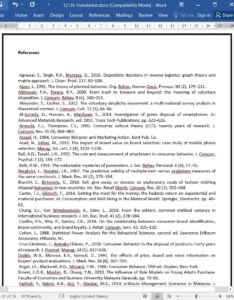