Knowledge on the short and long term deformation behavior of highly loaded components in tall timber buildings is important in view of improving future design possibilities with respect to serviceability, both in the construction and in the operational state. In this paper, we present the results of a monitoring case-study on a tall timber-hybrid building in Switzerland, a 15 storey and 60 m high office building completed in 2019. A fibre-optic measuring system showed an increase of the deformation with increasing load during the construction phase of highly stressed spruce-GLT and beech-LVL columns. However, the highest strain values were not reported in the columns themselves but at the ceiling transitions and in the area near their supports. The measurements on the columns were compared with model calculations for long-term deformation of timber elements in order to differentiate single components of the total deformation caused by load, time, and changes in climate during the construction. Over a monitoring period of a year, good agreement of the modelled deformations could be confirmed, which indicates that such models could be well suited for future usage in serviceability design of tall timber buildings.

Nowadays, a trend towards global increase in construction of tall timber buildings [1] can be observed. This type of construction, enabled by recent developments in both timber manufacturing and engineering, but also general client awareness, offers a competitive alternative in the high-rise building market. This is especially true in terms of its potential of reduction of climate-impacting emissions production as compared to traditional high-rise building structures [2,3]. In Switzerland, with the change of the fire protection regulations [4], timber high-rise buildings with a height of 30 m or above can be built as of January 2015. Recently, Switzerland’s first two tall timber buildings have been realized in the municipality of Risch-Rotkreuz in the canton of Zug [5]. The first building, Suurstoffi S22, completed in 2018, is an office building with 10 floors above ground and a height of 36 m [6].

In the highly stressed columns of the tall timber building Arbo, an increase in deformation with increasing load could be reliably measured during construction and initial service lifetime by using fibre optic sensors. Model calculations using a rheological model for the timber elements show a good agreement of the long-term deformation increase and can confirm the level of deformations during the construction state. This was also true in the case of the columns made from the novel product beech LVL. Furthermore, the measured deformations in the highly stressed columns at the time of the measurements are below the theoretical deformations which can be determined with the factor kdef = 0.6 according to Eurocode 5. However, for long-term periods over multiple decades the service climate variation could potentially cause an unknown amount of deformation due to moisture-dependent creep (mechano-sorptive effect). Especially in view of engineering assessment in this regard, further material properties, e.g. for beech LVL, and further long-term monitoring studies are needed. 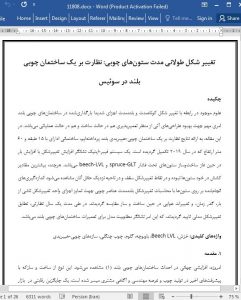 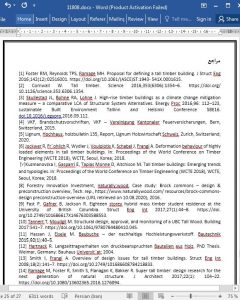