Analytical Hierarchical Process (AHP) along with fuzzy set theory has been used extensively in the Multi-Criteria Decision Making (MCDM) process in which fuzzy numbers are utilized to represent human judgments more realistically. Over the past couple of decades, numerous articles have been published proposing algorithms through which priority vector (or weight vector) can be calculated from fuzzy comparison matrices. The aim of this study is to conduct a comprehensive performance analysis of the most popular algorithms proposed in this domain in terms of accuracy of weights calculated from fuzzy comparison matrices. Such an analysis is much needed by the researchers and practitioners. However none is available. An experimental analysis is conducted and the performance of various algorithms are evaluated with varying three parameters i.e., the size of the comparison matrix, the level of fuzziness and the level of inconsistency. We found that modified Logarithmic Least Squares Method and Fuzzy Inverse of Column Sum Method (FICSM) generally outperformed other algorithms, while Fuzzy Extent Analysis (FEA) which is the most frequently used algorithm in the literature provides the least accurate results. Furthermore, it was observed that a modified version of FEA method significantly improved its performance.

Multiple Criteria Decision Making (MCDM) methodologies assist decision makers in choosing the best alternative while evaluating various competing and often conflicting criteria. Over the past many years, literature on MCDM has observed a steady growth [1] [2] while Analytical Hierarchical Process (AHP) proposed by Thomas L. Saaty [3] remains the most popular MCDM technique [4]. AHP seeks expert opinions in the form of pairwise comparisons and later derives ratio scales from comparison matrices which indicate the preferences of the decision maker among different alternatives in terms of the criteria as well as the preference i.e., weights of the criteria themselves. The normalized weighted sum over the criteria provides an overall score associated with each available alternative and thus help decision maker to choose the best decision.

In this research we compared performance of nine FAHP methods among which five FAHP methods are the most popular ones in the literature. Compatibility Index Value (CIV) is used as a performance metrics to evaluate all nine FAHP methods. Three experimental conditions are considered as part of the analysis, namely, size of the matrix (n), fuzzification level (α) and inconsistency (C.R). For the fuzzification parameter four levels are assumed as 0.25, 0.50, 0.75 and 1.00. The fuzzification parameter is not inherent to the problem that the decision maker is facing but more a decision variable as part of the process. That is to say, the decision analysts can set the fuzzification level and conduct FAHP accordingly. 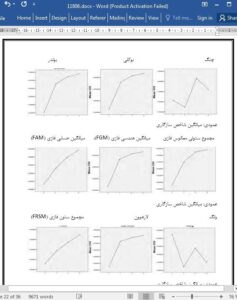 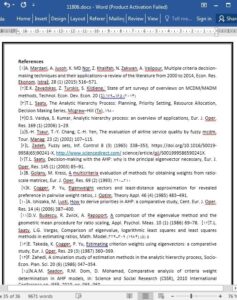