The poor performance of web-based systems can negatively impact the profitability and reputation of the companies that rely on them. Finding those user scenarios which can significantly degrade the performance of a web application is very important in order to take necessary countermeasures, for instance, allocating additional resources. Furthermore, one would like to understand how the system under test performs under increased workload triggered by the worst-case user scenarios. In our previous work, we have formalized the expected behavior of the users of web applications by using probabilistic workload models and we have shown how to use such models to generate load against the system under test. As an extension, in this article, we suggest a performance space exploration approach for inferring the worst-case user scenario in a given workload model which has the potential to create the highest resource utilization on the system under test with respect to a given resource. We propose two alternative methods: one which identifies the exact worst-case user scenario of the given workload model, but it does not scale up for models with a large number of loops, and one which provides an approximate solution which, in turn, is more suitable for models with a large number of loops. We conduct several experiments to show that the identified user scenarios do provide in practice an increased resource utilization on the system under test when compared to the original models.

A tremendous growth has been seen in the field of web technologies during the last two decades. The role of the web applications has changed from the traditional document presentation system to the feature-rich distributed appli cation that is accessible worldwide. Web applications are increasingly being utilized by a large number of companies to run critical business tasks. Thus, ensuring the reliable and stable performance of web applications is imperative for these companies. Poor performance makes the end-users abandon the use of web applications and can cause reputational and financial damage to those companies which rely on web-based platforms [1].

We have proposed an approach for performance testing of web applications in which we identify the worst path (i.e., a sequence of user interactions) in a given workload model which will cause the highest utilization of a given resource on the SUT. In order to answer RQ1, we have proposed an exact and an approximate method for detecting the worst path in the workload model. Then, in order to answer RQ2, we have analyzed both analytically and empirically the performance of the two methods. 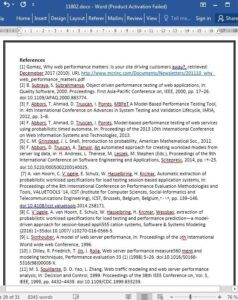