Utilizing a plasma to achieve sterilization is a possible alternative to conventional sterilization means as far as sterilization of heat-sensitive materials and innocuity of sterilizing agents are concerned. A major issue of plasma sterilization is the respective roles of ultraviolet (UV) photons and reactive species such as atomic and molecular radicals. At reduced gas pressure (≤10 torr) and in mixtures containing oxygen, the UV photons dominate the inactivation process, with a significant contribution of oxygen atoms as an erosion agent. Actually, as erosion of the spore progresses, the number of UV photons successfully interacting with the genetic material increases. The different physicochemical processes at play during plasma sterilization are identified and analyzed, based on the specific characteristics of the spore survival curves.

Sterilization is an act or process, physical or chemical, that destroys or eliminates all forms of life, especially microorganisms. Conventional sterilization techniques, such as those using autoclaves, ovens, and chemicals like ethylene oxide (EtO), rely on irreversible metabolic inactivation or on breakdown of vital structural components of the microorganism. Plasma sterilization operates differently because of its specific active agents, which are ultraviolet (UV) photons and radicals (atoms or assembly of atoms with unpaired electrons, therefore chemically reactive, e.g., O and OH, respectively). An advantage of the plasma method is the possibility, under appropriate conditions, of achieving such a process at relatively low temperatures (≤50 °C), preserving the integrity of polymer-based instruments, which cannot be subjected to autoclaves and ovens [1,2]. Furthermore, plasma sterilization is safe, both for the operator and the patient, in contrast to EtO.

Plasma inactivation is characterized by the existence of two or three distinct phases in the survival curves of a given type of spores. These phases correspond to changes in the dominating kinetics of spore inactivation as a function of exposure time. In the case of medium and low-pressure discharges, the basic process is the DNA destruction of the spore by UV irradiation, preceded in some cases by erosion of the microorganism through intrinsic photodesorption and etching (eventually enhanced by UV radiation). These elementary mechanisms clearly set plasma sterilization apart from all other sterilization methods. In that respect, the inactivation of pathogenic prions, which have no genetic material, could certainly be achieved through full erosion of these proteins [19]; however, it could be that intense UV radiation, acting synergistically with oxygen atoms, causes substantial damage to these proteins, thereby avoiding the need for a full erosion. More recently, and not included in the above presentation, we have shown that a better understanding of the inactivation process is attained by using the concept of fluence (number of photons actually interacting with the genetic material over a given period of time) that depends on the absorption coefficient and penetration depth of photons in the spore material [20]. Fluence is actually more appropriate than the incident flux of UV photons since DNA inactivation results from a given (statistical) number (or dose) of damaging hits on its strands [20]. 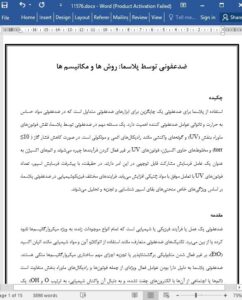 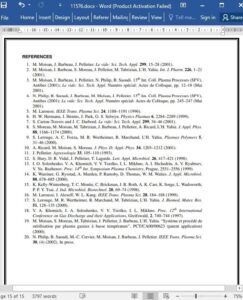