The goal of this paper is to examine the seismic response of eccentrically braced frames (EBFs) under artificial narrow-band mainshock-aftershock sequences by means of detailed analytical models representative of buildings designed under the Mexico City Code criteria. These analytical models take into account the nonlinear behavior of the links including a failure criterion. Relevant results for engineering practice showed that strong aftershocks could significantly increase interstory drift demands once the link fails, while surrounding members (adjacent beams, columns) behave nonlinearly, which is opposite to the design philosophy. In addition, it was noted the nonuniform distribution of hysteretic energy along-height of the links, which do not take fully advantage of the energy dissipating capacity of the shear links.

Eccentrically Braced Frames (EBF) have become an attractive earthquake-resistant structural system in many countries worldwide since it provides high levels of both elastic stiffness (similar to concentrically braced frames) and ductility (similar to moment-resisting frames). In EBFs, the seismic energy induced to the building during earthquake loading is dissipated through the inelastic behavior of the links, while the remaining elements (beams, columns, and braces) are expected to behave elastically. Currently, the design procedure for EBF is prescribed in the 2016 AISC Seismic Provisions for Structural Steel Buildings [1], which specifies the link design, link rotation limits, and link overstrength factors, among other issues. Particularly, the link rotation is limited to 0.08 rad for links behaving in shear (i.e. for links with length equal or smaller than 1.6Mp/Vp, where Mp and Vp are the plastic bending moment and the plastic shear strength of the link). A comprehensive review of relevant experimental and analytical research carried out on steel eccentrically braced frames is presented in Ref. [2].

This paper examined the seismic behavior of two steel eccentrically braced frames (EBF) assumed to be located at a soft soil site in Mexico City. The EBFs were designed to satisfy the lateral strength and stiffness requirements of the 2004 Edition of the Technical Requirements for Seismic Design prescribed in the Mexico City Building Construction Code. The analytical models of the EBFs, beams, columns, and braces were modeled using a distributed plasticity approach, while the links were modeled using a modeling strategy that simulate shear plastic hinges. In addition, the hysteretic response of the links considered a failure criterion (i.e. the links exhaust their shear capacity when an inelastic plastic rotation equal to 0.06 rad is reached during cyclic loading), which is consistent with its experimental response. Due to the scarcity of enough recorded mainshock-aftershock sequences at soft soil sites, three sets of artificial sequences with different intensity ratio, VA/ VM (i.e. ratio of the intensity of the aftershock with respect to the mainshock, considering that the mainshocks are scaled to reach the highest PGV recorded during the September 19, 1985 earthquake in Mexico City) were generated as part of this study 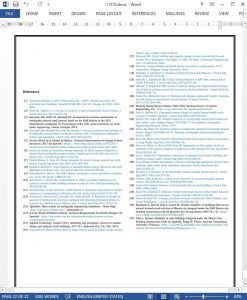