The energy dissipation potential of a metallic damper largely depends on the hysteretic response achieved due to the inelastic deformation of plates under either axial or flexural or shear loading. In this study, a passive energy dissipation device consisting of a series of steel plates capable of yielding in both flexure and shear has been experimentally investigated under cyclic loading. Two end plates of X-configuration are allowed to yield under flexural action, whereas a rectangular web plate of the device is allowed to dissipate energy through shear yielding. Three shear-and-flexural yielding damping (SAFYD) devices are studied by varying the size of both flexure and shear plates. The main parameters investigated are load-carrying capacity, hysteretic response, energy dissipation, equivalent viscous damping, and ductility. A finite element analysis has been carried out to predict the ultimate resistance and hysteretic response of the test specimen. The predicted results matched reasonably well with the test results. Finally, a design procedure has been proposed to proportion the flexure and shear plates of SAFYD devices for a given lateral load demand.

Conventional approach of energy dissipation in a structure is to allow the localized structural damages (i.e., plastic hinges) in the primary lateral load-resisting elements. These damaged elements require either complete replacement or extensive modification in the postearthquake scenario in order to restore their lateral strength, lateral stiffness, deformability, and energy dissipation/absorption mechanism. A number of innovative techniques have been developed to improve the performance of structures subjected to earthquake excitations by minimizing the damages in the primary load-resisting elements. Traditionally, seismic isolation at the foundation level of a structure is one of the techniques used to increase the structural flexibility, thereby, reflecting a major portion of the earthquake energy [1–4]. The modern techniques of controlling seismic response involve the installation of supplemental energy dissipating/absorbing devices in the structures. The primary aim of adding these supplemental devices in a structure is to dissipate the seismic energy through the hysteretic behavior of specially designed elements and to avoid the localized damages in the primary load-resisting structural elements.

The following conclusions can be drawn from the present study:

• The combination of shear and flexural yielding of plates in metallic dampers significantly increases the lateral load carrying capacity and the energy dissipation potential as compared to the ADAS and shear link devices. A considerable saving in materials and cost can be achieved in the case of SAFYD devices for the same level of lateral strength and energy dissipation. 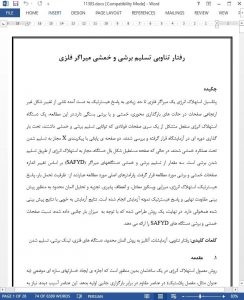 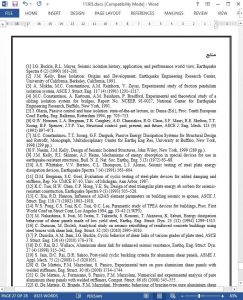