In this paper, a new passive earthquake damper termed as Bar-Fuse Damper (BFD) is presented for frame structures. The BFD is developed from common steel sections such as hot-rolled Square Hollow Sections (SHS), C-channels, plates and bars. It is economical, easy to install and build with no special fabrication technique. The key feature of the BFD is using round steel bars as energy absorber components that can be easily replaced in case of failure. The proposed device dissipates the energy with the replaceable bars as sacrificial elements through the flexural and tensile mechanism. The performance of several full-scale BFDs was evaluated with a series of monotonic and cyclic experiments, and the bars successfully performed their function as energy absorbers and fuses in all specimens. The effects of variations in the number, length and diameter of bars in the BFD along with the nuts arrangement were investigated in this experimental study. This study indicates that the recommended device has stable hysteretic behaviour under cyclic loads with two significant features: appropriate energy dissipation and replaceability of the fuses, which can be useful to protect the main elements of structures from plastic deformation and failure for several events. The results obtained for the BFD are promising for its use as a passive seismic damper in engineering structures in order to improve the seismic behaviour of structures as well as dissipating the earthquake energy.

In this paper a new passive earthquake damper, the Bar-Fuse Damper (BFD), was presented and evaluated both experimentally and numerically. The performance of the BFD was assessed with more than 30 monotonic and cyclic experiments, and the applied bars successfully performed their function as energy absorbers and fuses in all the specimens. The proposed device showed appropriate ductility, energy absorption and stable hysteretic behaviour under cyclic loads without any sudden strength and stiffness degradation. The performance of the BFD depends highly on the nut arrangements of the bars. The simplest design, two nuts on the both ends of the threaded bar, gave a reliable behaviour to the proposed device, as well as the possibility of convenient placing and replacing the bars when they were failed. This proper replacement capability can be considered as a key feature of the proposed device over to other available metallic dampers. 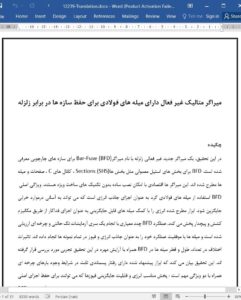 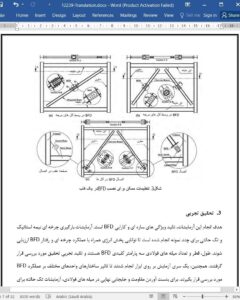