Breeding green varieties that have high yield potential and require less resource input is the ideal way to cope with the challenges that human is facing with respect to food security and environmental pollution. However, few studies have focused on how high yield and high resource use efficiency is coordinated in rice (Oryza sativa L.). Here three varieties with different sink size, namely Yongyou4949 (YY4949) with large sink size, Yangliangyou6 (YLY6) with medium sink size, and Huanghuazhan (HHZ) with small sink size, were used in field and pot experiments in 2015–2017. The objective was to examine how enlarged sink size coordinate high yield and high nitrogen (N) use efficiency (NUE). It was found that YY4949 produced a grain yield of 9.60-11.79 t ha−1 in 2015–2017, which was higher than that of YLY6 by 0.3-1.75 t ha−1, and that of HHZ by 1.3-2.18 t ha−1. N use efficiency for grain production (NUEg) of YY4949 reached 47.7-58.3 kg kg−1 depending on the weather condition, which was 5.3–12.8% higher than that of YLY6 and 15.8–20.7% higher than that of HHZ. The concomitantly higher grain yield and NUEg of YY4949 were due to: (1) higher efficiency of spikelet production in respect of dry matter, N, accumulated temperature and radiation; (2) higher biomass production and N accumulation after flowering; (3) higher RUE after flowering due to the better canopy structure. In conclusion, rice breeding in the future should continue to enlarge the sink size especially through the improvement in production efficiency of sink size, while simultaneously increase the post-heading biomass production capacity.

At its current rate of growth, the global population is set to reach ˜10 billion people by 2050 (UN, 2017). Increasing crop production to maintain food security while reducing agriculture’s environmental impacts is the dual challenges that human is facing in the future (Cassman, 2003; Cui et al., 2018). Moreover, this objective has to be realized under the condition of changing climate (Peng et al., 2004). Hence the traditional goal of pursuing super-high yield has been replaced by achieving high yield, high quality, high efficiency, environmentfriendly, and food safety simultaneously at the beginning of 21st century (Cassman, 2003; Zhang, 2007).

Due to the measurement of NUE parameters is complex and timeconsuming, scientists are always trying to identify the readily measured agronomic or physiological traits that can be used as a proxy of NUE (Broadbent et al., 1987; de Datta and Broadbent, 1993; Singh et al., 1998; Koutroubas and Ntanos, 2003; Wu et al., 2016). Unfortunately, until now no such parameters could satisfy breeders’ requirement. Based on our previous finding that grain yield, NUE, and sink size were concomitantly increased along with the rice genetic improvement in China (Zhu et al., 2016) and the genetic linking between panicle size and NUE (Huang et al., 2009; Hu et al., 2014), the present study examined the physiological mechanisms underlying the coordination of high grain yield and high NUE by large sink size especially at reduced N input condition. Difference in sink size among the three varieties varied depending on the weather condition in each year, which was consistent with difference in NUEg among the three varieties. In general, the large sink size variety YY4949 had significantly higher grain yield and N utilization efficiency (namely NUEg) especially when no high temperature occurred at heading stage. There were three physiological causes for the higher grain yield and higher NUEg of YY4949: (1) higher efficiency of spikelet production in respect of dry matter, N, accumulated temperature and radiation; (2) higher biomass production and N accumulation after flowering; (3) higher RUE after flowering due to the better canopy structure 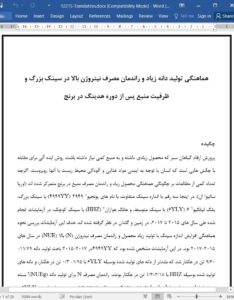 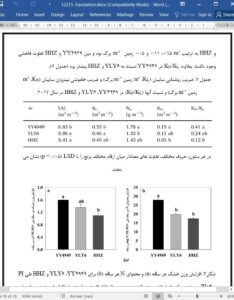 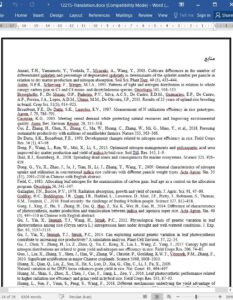