Satellite communications can be used when other communication systems are either destroyed or overloaded. Observation satellites and delay/disruption tolerant networks (DTNs) are technologies that can be interconnected to provide emergency communication for disaster recovery operations. DTNs use a store-carry-forward mechanism to forward messages through intermediary nodes to the destination node. The reliability of relaying messages through multi-hop nodes poses a significant problem in DTNs due to lack of consistent connectivity. These network characteristics make DTNs to heavily rely on the cooperation of neighboring nodes for the successful delivery of packets. However, the presence of malicious or selfish nodes will have a great impact on the network performance. In this paper, we design a decentralized trust management scheme (DTMS) to filter out malicious nodes in DTNs. First, the number of forwarding evidence is combined with the energy consumption rate of the nodes to formulate direct trust. Then, a recommendation trust is computed from the indirect trust, recommendation credibility, and recommendation familiarity. Recommendation credibility and familiarity improve the overall recommendation trust by filtering out dishonest recommendations. A comparative analysis of DTMS is performed against a cooperative watchdog scheme, recommendation based trust model, and spray and wait protocol. The results show that DTMS can effectively deal with malicious behaviors in DTNs including trust related attacks.

Delay/Disruption Tolerant Networks (DTNs) are network architectures developed to cope with intermittent connectivity and long delays in wireless networks. Unlike traditional networks where packets are forwarded along fixed links, DTNs use a store-and-forward approach to overcome the lack of endto-end paths [1], [2]. DTNs comprise of nodes with limited resources such as buffer space and power. These constraints in resources, in addition to the sparsity and mobility of these nodes often result in intermittent connectivities. The application of DTN spans across a wide range of domains including Under-Water Networks (UWNs), Pocket Switched Networks (PSNs), Vehicular Ad-hoc Networks, Military applications and Disaster recovery and rescue operations [3], [4].

In DTNs, trust models have become important in mitigating routing behaviour from compromised nodes. The most common routing misbehaviour in DTN is message dropping which degrades the network performance. Therefore, an adequate and efficient detection mechanism is required to mitigate this routing misbehaviour. In this paper, a decentralised trust management scheme has been designed and validated for mobility-aware DTNs. The proposed scheme combines the forwarding behaviour of nodes and their energy consumption rate to compute direct trust. Second-hand information from neighbouring nodes are also incorporated into the trust model as recommendation trust. The recommendation trust incorporates indirect trust, recommendation credibility and familiarity which is an event based trust. Extensive simulation results show that DTMS effectively mitigates routing misbehaviour such as packet dropping attacks and colluding attacks. In our future work, we will exploit solutions such as using DTN gateways to reduce energy consumption during the computation of direct and recommendation trust. 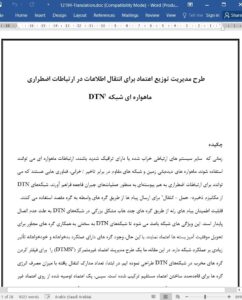 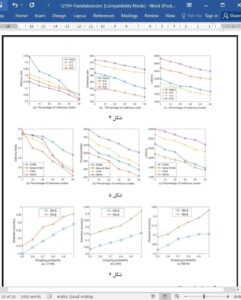 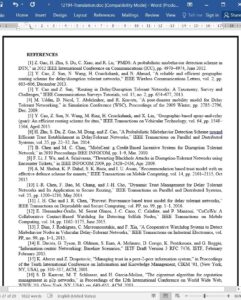