The recent significant development of technical infrastructures in Poland, along with the construction of tower blocks, roads, railways and underground rapid transit system, resulted in greater demands for investment projects as well as geotechnical data characterizing the variation of various soil parameters found in the subsoil. The most important parameter, which represents the stiffness of soil deposits, is the shear modulus G. Therefore, this study focused on determining the initial shear modulus of cohesive soils from the area of the capital of Poland. In this research, a set of the resonant column (RC) tests was performed and the influence of three selected factors, i.e. mean effective stress (p’), void ratio (e) and plasticity index (PI), on the low-amplitude shear modulus (G0) was presented and discussed. The results obtained from laboratory tests indicated that the stress state plays an important role for the small-strain shear modulus values of the Polish Quaternary cohesive soils. In contrast, there was no clear trend observed for the significant effect of e or PI on G0 for the studied soils. Based on the performed tests, the authors proposed the power-law relations for G0 versus p′ of the forms: G0=3.02p′0.68 and G0=0.82p′0.96.

Over sixty years, a significant amount of research has been carried out in order to understand better the mechanical response of soils under dynamic excitations. A variety of laboratory techniques were used for these studies, e.g. cyclic torsional shear tests, cyclic direct simple shear tests, cyclic triaxial tests and resonant column tests. They allowed researchers to define the impact of many factors, most importantly of strain amplitude and frequency of excitation, on soil behaviour (Lai et al. [1]).

In the presented study, dynamic properties of normally consolidated and lightly overconsolidated cohesive soils were investigated using the resonant column method. Various types of clayey soils from two different test sites in the Warsaw area were selected. For each type of specimen, wide ranges of the mean effective stress values, void ratios and plasticity index values were considered. The resonant column tests were performed on each specimen. The authors attempted to create an empirical expression describing the soil deformation characteristics in the range of small strains. 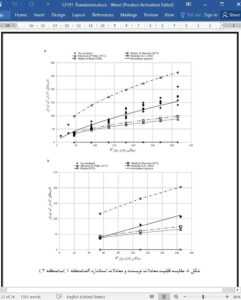 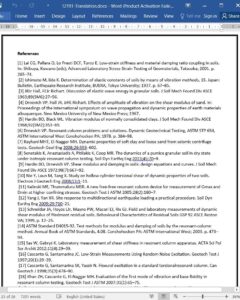