Experiencing a divorce can be challenging and have a lasting impact on people's lives, but does it change your personality? By making use of large panel surveys from Australia, Germany, and the United Kingdom, intra-individual change in the Big Five personality traits of those who separated during a four-year observation, was compared to that of those who remained married. We tested the replicability of divorce-induced personality change across the three country samples, while also examining gender differences and separation duration. Latent difference score models mostly indicated that divorce is not a consistent predictor of personality change, as only isolated effects were found, and these could not be replicated across samples. Aside from the overall lack of replicable effects a few isolated effects were detected that offer some support for a modified version of the social investment principle. Nonetheless, the overall finding of this study suggests that experiencing a divorce is unlikely to lead to permanent personality change.

Although personality development stabilizes during adulthood, change continues throughout the lifespan, albeit to a lesser extent than during earlier life stages (Roberts et al., 2006). This begs the question of what causes adult personality change. Some scholars have argued that the experience of divorce may hold some answers, but relevant studies remain scarce and divorce has therefore been largely ignored as a potential disrupter of personality stability (but see Allemand et al., 2015; Asselmann & Specht, 2020; Costa Jr. et al., 2000; Denissen et al., 2019; Pusch et al., 2019; Specht et al., 2011). Similarly, the literature regarding the consequences of divorce has focused on a range of outcomes, such as well-being (Kalmijn, 2010), income (Gadalla, 2008), or health (Hughes & Waite, 2009), but overlooked its effect on personality. The current research aims to combine both fields by addressing the following research question: ‘Does marital separation lead to changes in the Big Five personality traits?’ Acknowledging the strengths of the seminal work of Specht et al. (2011), the latent structure of personality traits is incorporated into the analysis, using latent growth modelling to investigate the effect of marital separation on personality change. In line with more recent research by Denissen et al. (2019) and Asselmann and Specht (2020) we also examined anticipation and temporary effects that could influence divorce-induced personality change. 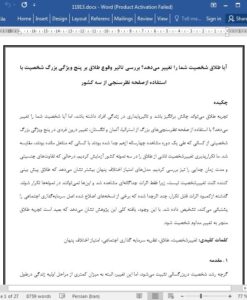 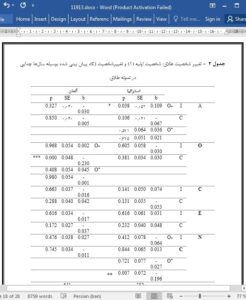