The control of vibrations and damage in traditional reinforced concrete (RC) buildings under earthquakes is a difficult task. It requires the use of innovative devices to enhance the seismic behavior of concrete buildings. In this paper, we design RC buildings with buckling restrained braces (BRBs) to achieve this objective. For this aim, three traditional RC framed structures with 3, 6, and 9 story levels are designed by using the well-known technique nondominated sorting genetic algorithm (NSGA-II) in order to reduce the cost and maximize the seismic performance. .en, equivalent RC buildings are designed but including buckling restrained braces. Both structural systems are subjected to several narrow-band ground motions recorded at soft soil sites of Mexico City scaled at different levels of intensities in terms of the spectral acceleration at first mode of vibration of the structure Sa(T1). .en, incremental dynamic analysis, seismic fragility, and structural reliability in terms of the maximum interstory drift are computed for all the buildings. For the three selected structures and the equivalent models with BRBs, it is concluded that the annual rate of exceedance is considerably reduced when BRBs are incorporated. For this reason, the structural reliability of the RC buildings with BRBs has a better behavior in comparison with the traditional reinforced concrete buildings. .e use of BRBs is a good option to improve strength and seismic behavior and hence the structural reliability of RC buildings subjected to strong earthquake ground motions.

In the past few years, an extensive amount of buildings has suffered damage due to medium and large earthquakes. Structural systems have evolved in order to reduce seismic damage. Nowadays, one of the most used structural systems is that based on reinforced concrete frames. Reinforced concrete buildings have been frequently used; nevertheless, the main disadvantage of them is the difficulty to be repaired after the occurrence of an earthquake. Furthermore, RC structures located on seismic zones usually are subjected to large peak interstory drift displacements produced by the lateral loads.

The seismic performance of three traditional reinforced concrete buildings and equivalent structures with BRBs is assessed through incremental dynamic analysis, seismic fragility, and structural reliability. For this aim, the maximum interstory drift was selected as engineering demand parameter. .e buildings were subjected to several narrowband motions recorded at soft soil of Mexico City. .e results indicate that the maximum interstory drift demand is smaller in the case of the RC-BRB buildings in comparison with the reinforced concrete structures. Moreover, the uncertainty in the structural response prediction also tends to decrease when the BRBs are used in the RC buildings. 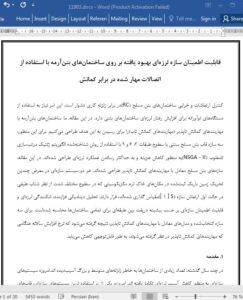 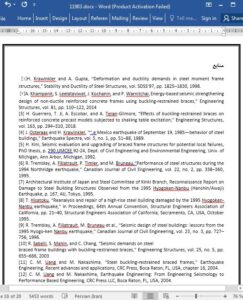