This manuscript presents a review of the potential and challenge of using recycled concrete aggregate (RCA) as the substitute for natural aggregate (NA) in concrete mixtures. Using RCA in concrete preserves the environment by reducing the need for opening new aggregate quarries and decreases the amount of construction waste that goes into landfill. The properties of RCA such as specific gravity, absorption, and the amount of contaminant present in it contribute to the strength and durability of concrete. The quality of RCA depends on the features of the original aggregate and the condition of the demolished concrete. Some researchers have reported that the use of RCA degrades concrete properties while others have successfully produced RCA concrete with a performance that matched normal concrete (NC). In addition to the influence of RCA to concrete properties, this paper also evaluates multiple techniques to improve the performance of RCA concrete, reported cost savings in concrete production and recommendations regarding the application of RCA in concrete.

Concrete is known as one of the most highly consumed construction materials. The primary ingredients of a concrete mixture are cement, aggregates (coarse and fine), water and admixtures (Mindess et al., 2003; National Ready Mixed Concrete Association (NRMCA), 2012). Among the aforementioned components, aggregate takes up about 70% to 80% of concrete’s volume. Types of NAs that are commonly used in concrete application consist of crushed stone, sand, and gravel (USGS, 1997). These NAs are obtained through mining natural resources and opening aggregate quarries. The mining process of NAs generally takes place in vast aggregate quarries that involves heavy equipment and consumes an excessive amount of energy. The resources of NAs are abundant but finite (USGS, 1997). Challenges may develop in construction due to depletion and scarcity of the sources, restrictions on opening new sources and the increased production cost. Using recycled aggregate (RA) may help to address some of these challenges (ACPA, 2009; Verian, 2012). RA can be derived from existing concrete, and thus, termed as recycled concrete aggregate (RCA). According to de Vries (1996), the application of RCA in construction works has become a subject of priority throughout many places around the world. As indicators, 10% of the total aggregates used in the United Kingdom (UK) are RCA (Collins, 1996), 78000 tons of RCA were used in the Netherlands in 1994 (de Vries, 1996) while Germany has been aiming a target of 40% recycling rate of its building and demolition waste since 1991 (van Acker, 1998). According the data in 1997, 0.9 million out of 1.06 million metric ton of the recycled old concrete was used for construction in Denmark (Schimmoller et al., 2000). The annual production of recycled materials derived from old asphalt pavement reached 0.8 million metric ton in Sweden in 1999, in which 95% of it was used in the new asphalt pavement (Schimmoller et al., 2000).

9.2. Recommendations for use of RCA in concrete

Based on results of various studies by different researchers, several recommendations on the application of RCA in concrete are summarized as follows: – To achieve good quality, the contaminants on RCA should be minimized. The removal of unwanted contaminants on RCA can be done by crushing RCA with the appropriate type of crushers (i.e. impact crusher and cone crusher) which are effective at removing the adhered mortar on the surfaces of the RCA (ACPA, 2010). Washing the RCA prior to the batching process is also recommended to minimize the amount of fine particles (minus #200 sieve/74 μm) and to reduce the potential of mixture workability problem associated to the moisture absorption during the mixing process (ACI Committee, 2001). Soaking the RCA in the 0.1 M of HCl solution is also an option for removing the old mortar from the RCA.

– The use of RCA in saturated condition is recommended to assure a better workability than using dry RCA. This effort can be combined with adding water reducing admixture into the mixture. 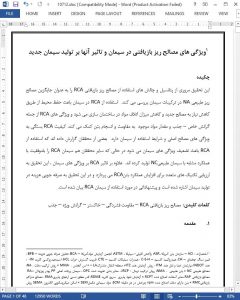 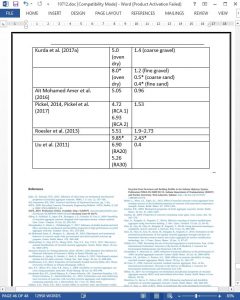