Over the past two decades, an increasing number of central banks have become more transparent about their objectives, procedures, rationales, models and data. This has stimulated intensive ongoing research about the effects of central bank transparency.2 Most economists agree that openness and communication with the public are crucial for the effectiveness of monetary policy, because they allow the private sector to improve expectations and hence to make better-informed decisions (Blinder, 1998). Counterexamples have been provided, with addition of distortions, where information disclosure reduces the ability of central banks to strategically use their private information, and therefore, greater transparency may not lead to welfare improvement (e.g., Sorensen, 1991; Faust and Svensson, 2001; Jensen, 2002; Grüner, 2002; Morris and Shin, 2002).3 In effect, according to the second-best theory, the removal of one distortion may not always lead to a more efficient allocation when other distortions are present.

In a two-period model where productivity-enhancing public investment could improve future growth potential, we have examined the interaction between central bank transparency and fiscal policy and the resulting effects on macroeconomic performance and volatility. In the framework of the Stackelberg equilibrium, where the government is the first mover and the central bank the follower, we have shown that the effects of the central bank’s opacity (or lack of transparency) depend on the marginal effect of public investment. 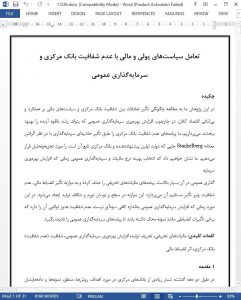