This study aims to analyze the electricity generation and its environmental aspects in Tehran city by using the LEAP model and developing two scenarios, including Business-As-Usual and Sustainable-Waste-Management (SWM). The base and final years of the planning are 2012 and 2035, respectively. It is attempted to integrate two models of IPCC (Intergovernmental Panel on Climate Change) for methane flow rate estimation and LEAP to estimate Tehran’s energy and non-energy emissions. By linking these two models, the energy and environmental effects of the SWM scenario are estimated. To calculate the power production of the landfill gas (LFG) plants, the gas turbine model of GE10 is selected, and an Engineering-Equation-Solver (EES) code is developed based on methane flow rate and composition data obtained from the IPCC default method in the SWM scenario. The combination of EES codes and LEAP analysis shows that the LFG plants can supply 0.5 GW h power, which is 1.4% of the total demand in 2016, but it will raise to 0.9 GW h in 2035. Although utilization of LFG plants increases the cost of electricity production, the accumulated difference of 100 years global warming potential in the studied scenarios will be 81.2 Mt CO2 equivalent from 2012 to 2035.

Today, it is undeniable that the electricity generation of the industry throughout the world is significantly oil dependent, and substituting other energy resources for this black gold in a short term period is impossible. As a result, with respect to the intensive demand of energy, the environmental problems have become one of the most important concerns of the human beings. Thus the necessity to move away from or at least decrease the reliance of oil as soon as possible is essential.

It is known that oil resources are distributed unevenly around the world. Over 60% of oil reserves are found in Middle East [1]. Iran is one of the most hydrocarbon-rich areas in the world and Tehran, the biggest city of Iran, is one of the major consumers of oil and gas due to high electricity demand.

This research provided a comprehensive analysis on the environmental and energy effects of LFG plants on Tehran’s energy system until 2035. Sustainable scenario altered the electricity dispatching situation in Tehran’s energy system considerably by utilizing LFG power plants. Also, it mitigated GHGs emitted from municipal SWDSs noticeably. These type of renewable power plants supplied about 0.5 GW h which is 1.4% of the total demand in 2016 and an incremental trend continued, so that it reached to 0.9 GW h in 2035 which was 1.77% of the total demand. The results signify that populated cities such as Tehran, have exclusive potential to apply LFGs which helps countries to attain energy selfsufficiency especially for those with restrictions in energy resources. The LFG technology is classified as renewable. Thus, LFG allows policymakers to diminish the dependence on fossil fuels. 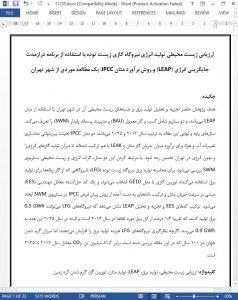 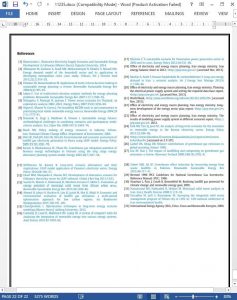