An ambulance location problem has been extensively studied since as early as 1970s (Church and ReVelle 1974; Toregas et al. 1971). The problem is to determine the locations of ambulances to provide maximum coverage to potential demand sites. Locations of available ambulances are a major factor to determine the response times to arriving calls. Brotcorne et al. (2003); Farahani et al. (2012); Li et al. (2011); Owen and Daskin (1998); ReVelle and Eiselt (2005) provide a comprehensive review of location problems in emergency medical service (EMS) systems.

Ambulance location problems are often formulated as a covering problem. A demand site is considered covered if it can be reached from an ambulance station within a time standard. Then, the problem finds optimal number and locations for ambulances so that the sum of covered demand sites is maximized. The classic ambulance location problems model the coverage as deterministic. It assumes that ambulances are always available to respond to emergency calls. On the other hand, more recent models incorporate randomness in ambulance’s availability. These models often use the concept of busy fraction of an ambulance—probability for being unavailable to respond to a call. 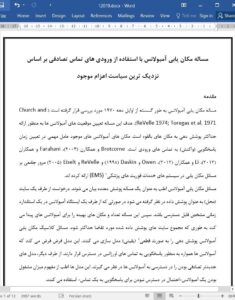