Recent studies demonstrated that inhibitors of pro-inflammatory molecular cascades triggered by rabies infection in the central nervous system (CNS) can enhance survival in mouse model and that certain antiviral compounds interfere with rabies virus replication in vitro. In this study different combinations of therapeutics were tested to evaluate their effect on survival in rabies-infected mice, as well as on viral load in the CNS. C57Bl/6 mice were infected with Silver-haired bat rabies virus (SHBRV)-18 at virus dose approaching LD50 and LD100. In one experimental group daily treatments were initiated 4 h before-, in other groups 48 or 96 h after challenge. In the first experiment therapeutic combination contained inhibitors of tumour necrosis factor-α (infliximab), caspase-1 (Ac-YVAD-cmk), and a multikinase inhibitor (sorafenib). In the treated groups there was a notable but not significant increase of survival compared to the virus infected, non-treated mice. The addition of human rabies immunoglobulins (HRIG) to the combination in the second experiment almost completely prevented mortality in the pre-exposure treatment group along with a significant reduction of viral titres in the CNS. Post-exposure treatments also greatly improved survival rates. As part of the combination with immunomodulatory compounds, HRIG had a higher impact on survival than alone. In the third experiment the combination was further supplemented with type-I interferons, ribavirin and favipiravir (T-705). As a blood-brain barrier opener, mannitol was also administered. This treatment was unable to prevent lethal consequences of SHBRV-18 infection; furthermore, it caused toxicity in treated mice, presumably due to interaction among the components. In all experiments, viral loads in the CNS were similar in mice that succumbed to rabies regardless of treatment. According to the findings, inhibitors of detrimental host response to rabies combined with antibodies can be considered among the possible therapeutic and post-exposure options in human rabies cases.

There is a considerable demand on the development of novel treatment strategies against rabies encephalitis to overcome the current disappointing success rate in attempts to treat human rabies [35]. After former empirical approaches by clinicians facing rabies cases now there is increasing knowledge available about rabies pathogenesis and factors related to survival [7,8,11,26], allowing faster progress in this field in recent years. This study reports another promising result with partial success in treatment of mice with different combinations of therapeutics after wild-type RABV challenge. 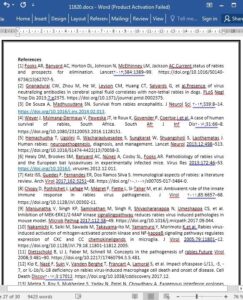