The hotel industry is plagued with asymmetric information, which may distort prices and reduce incentives to provide quality service. However, both branding and hotel star ratings play an important role in reducing information asymmetry. The question addressed here is whether electronic word-of-mouth (eWOM) - an increasingly popular form of online feedback -contributes to any further reduction in information asymmetry; and, if so, in what manner. Using a dataset of listed prices and guests' ratings extracted from Booking.com, including several covariates, we show that the price–reputation gradient is much steeper in lower star-rated hotels than in higher star-rated hotels. The gradient is also steeper in unbranded hotels than in branded hotels. As lower star-rated and unbranded hotels are laden with greater quality uncertainty, this finding lends support to the hypothesis that the greater the information asymmetry, the greater the role of eWOM in reducing that uncertainty. Managerial implications are discussed.

Since the 1995 launch of Amazon, which first allowed online shoppers to post product feedback, online consumer reviews have become increasingly popular and widespread. Although electronic word of mouth (eWOM) is perceived as being less reliable than off-line worldof-mouth (Chatterjee, 2001), it is considered more credible than information created by the sellers themselves (Chen & Xie, 2008). Furthermore, eWOM has several advantages, including the ability to disseminate information more quickly and spontaneously than traditional world-of-mouth. Attesting to the popularity of eWOM, 90% of customers in the United States reported that their buying decisions are influenced by online reviews (Gesenhues, 2013) and 80% of British consumers were found to be influenced in the same way (Casaló, Flavián, Guinalíu, & Ekinci, 2015). In the hotel industry, Gretzel and Yoo (2008) estimated that 75% of travelers worldwide consider eWOM as an information source when planning their trips. Given the frequency with which eWOM is used, it is not surprising that the emerging literature has established a significant link between eWOM and the performance of companies.

5.2. Limitations and suggestions for future research

A possible limitation on the interpretation of our results is the fact that we used listed prices rather than actual prices as our dependent variable. For obvious reasons, hotels which operate in a highly competitive environment are disinclined to voluntarily disclose information on realized prices. This is why other studies have also employed listed prices in studying the effects of eWOM.14 Indeed, listed room prices may eventually differ from realized prices. However, these differences in listed prices in the cross section of sellers, reflect variation in a host of possible factors, including the favorability of online customer reviews; hotels armed with better review scores are in more favorable position to list higher prices than those listed by rival hotels. For this reason, we believe that listed prices are a good proxy for realized prices. 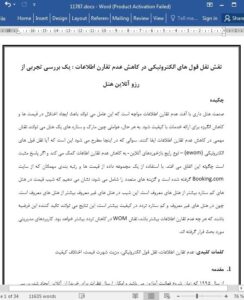 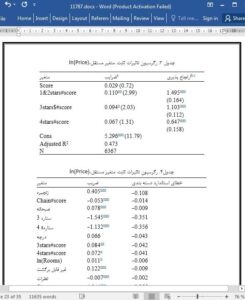 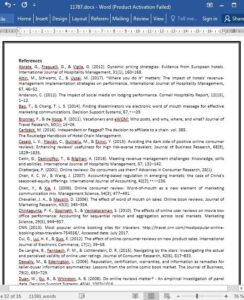